This week we’re wrapping up work with a client that focused on using data analytics to facilitate marketing automation based on web traffic. For example, the client wanted to message only to a group of members who visited a particular page or series of pages on their website. By visiting the page, they showed implicit interest in the topic, which means they might be interesting a related publication or event.

To do this, we took web analytics data from the data mart and put it back into the Association Management System (AMS).  The goal was to enable a particular set of data to be used in a more automated fashion for marketing.

This is a slightly unconventional approach, but here’s why we did it.

In order for the data set to be used in automated marketing it needed to be accessible to the marketing engine, in this case, RealMagnet. If you’re familiar with RealMagnet, you likely know that data can be brought into it manually or via an integration with your AMS.  The client wanted to automate the process so we had to duplicate the Google Analytics data into the AMS so it was accessible to RealMagnet.

The flow of the solution ended up being like this: 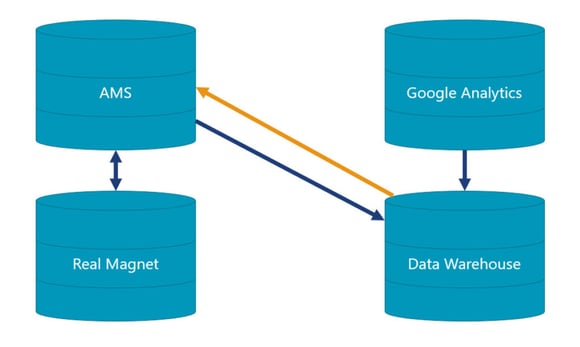 As you can see, the data we put into the AMS originated from Google Analytics.

It's important to note that Google Analytics's API has daily limits. The data set we brought isn't currently close to the limit, but we did experience large spikes. Plus, other sets of Google Analytics data is extracted nightly, which count against the daily limit. However, if we were to duplicate the extract directly to the AMS, we’d be closer to the imposed limit which could limit future growth.  Another downside to that approach would have been implementing the Google Analytics extract on the AMS server which means you would have to maintain it in two places on two separate VPNs.

Instead of going directly from Google Analytics to the AMS, we opted to use the API of the AMS to insert the data to a custom table once it was extracted nightly from the Google Analytics API. Aside from being a more straight-froward approach, this enables us to clean the data prior to insert. We removed any entries that weren't authenticated with a logged in user in which the customer key was tracked in a custom dimension in Google Analytics.  We also performed aggregation to sum total page views per user, per day loading back to the AMS.

Once the data is in the AMS, it is a simple join to the individual record to get the email address and perform marketing automation by writing queries and flowing data into the RealMagnet engine.

At the beginning of this post I used the word “unconventional.” On the surface talking about putting data in an automated fashion from the data mart into the AMS seems so, but once you get into the details it becomes clear it really is the optimal solution for associations who want to take action on their data.